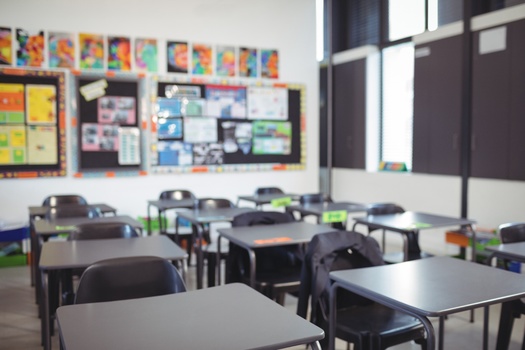 As the nation deals with the horrific shooting in Uvalde, where 19 children and two teachers were killed, teachers’ unions in Illinois and America are pushing lawmakers to pass tougher gun control measures strict rules and mental health support for teachers and students.

Kathi Griffin, president of the Illinois Education Association (IEA), which represents about 135,000 teachers and education support staff across the state, explained the effect on schools.

“Every time someone gets hurt at school or killed by another, it’s heartbreaking,” Griffin said. “And it’s not just the teachers, it’s our children. On top of the trauma of the pandemic.”

In 2019, the IEA helped get the General Assembly pass the School Threat Assessment Act, requiring schools to establish threat assessments and take a preventative approach to school violence. school.

Griffin pointed out that the National Education Association offers trauma training for teachers, which in turn can help students.

The Economic Policy Institute estimates that the U.S. supply of teachers will fall 200,000 below projected demand by 2025.

Randi Weingarten, president of the American Federation of Teachers, addressed a congressional subcommittee on Wednesday. She said counselling, mental health support and investments in “community schools”, which integrate academic, health and social supports, will help keep teachers in education.

“Full-service community schools will actually help children and help teachers teach and identify issues that we see before we see these kinds of horrible situations that we saw last night,” Weingarten argued.

Illinois has long struggled with gun violence, in part because of gun smuggling from states with looser gun rules. According to the 2017 Chicago Gun Trails Report, about six of the 10 firearms recovered after a crime in the previous three years were from out of state, mostly from neighboring Indiana.

Disclosure: The American Federation of Teachers contributes to our fund for reports on education, health issues, living wages/working families and social justice. If you would like to help support news in the public interest, click here.

During the COVID pandemic, West Virginia elementary school enrollment has plummeted and ranked near the bottom among states on some education metrics. However, these students are now catching up with what they may have missed while learning remotely with the help of a global nonprofit organization.

Cathryn Miller, state director of the Save the Children’s West Virginia program, said her organization faced an uphill battle in the Mountain State.

“If you look at the 2021 US Census, West Virginia was in the bottom 10 states for school disruption and for having the tools they need to learn at home,” she said. “Some schools did not receive enough devices during their remote learning through January 2021.”

Miller said Save the Children now partners with 50 schools in eight West Virginia counties to provide early education and social-emotional learning programs to about 2,300 children.

Miller said elementary education programs are offered both during the day and after school, with a focus on two core subjects.

“They focus on building reading and math skills at the end of third grade, which is that critical time when kids need to move from learning to read to reading to learn,” he said. she declared. “And that’s really what sets them up for future success in school and in life.”

Shane Garver, education, hunger and resilience manager for Save the Children, said while West Virginia’s education system was one of the hardest hit, most American families were struggling to monitor their children’s schooling during the pandemic.

“At the start of the pandemic, nine out of 10 families with children across the United States faced significant disruption to their child’s learning,” he said. “Recent research has shown that children are four to five months behind in reading and math.”

Disclosure: Save the Children contributes to our fund for reporting on children’s issues, early childhood education, education, poverty issues. If you would like to help support news in the public interest, click here.

As Pennsylvania budget negotiations get underway, a new report details the state’s investment in early childhood education. Proponents hope this will spur lawmakers to increase funding for the budget.

Despite increased support for pre-K during the pandemic, Kari King, president and CEO of Pennsylvania Partnerships for Children, said there was still work to be done because 61% of eligible 3- and 4-year-olds in the state are still not served.

The increase in Wolf’s preschool budget would go to Pre-K Counts and the Head Start Supplemental Assistance Program, which focus on early childhood education for low-income families. The budget must be finalized by June 30.

The report included investment recommendations to improve the quality of Pennsylvania’s pre-K programs. King said supporting educators through professional development is one step.

“Recruitment and retention is a really big issue in this industry, especially since the pandemic,” she said. “So to see what we can do to help the workforce get those degrees – so the programs can be high quality, because that’s really where it shows that kids are doing better.”

An analysis of Pennsylvania’s pre-K programs by the University of North Carolina-Chapel Hill found that children in pre-K have significantly higher language and math skills than their peers. King said the report will be shared with General Assembly leaders and the Wolf administration.

Disclosure: Pennsylvania Partnerships for Children/KIDS COUNT contributes to our fund for reporting children’s issues, early childhood education, education, and health issues. If you would like to help support news in the public interest, click here.

A new toolkit for children in grades K-5 provides resources for teaching about consent and healthy relationships.

“Especially girls, right? Especially LGBTQ youth, especially young people of color — a lot of them experience sexual violence when they graduate from high school,” Erdheim said. “So if you start this education with everyone in high school, it’s too late.”

One in four girls and one in 13 boys experience sexual abuse at some point in their childhood. Erdheim said it’s important for elementary students to understand what consent is — not just to prevent abuse, but so they can share with a trusted adult if they need support.

Erdheim said there is a common misconception that consent education is only about sex, but noted that there are many other contexts, and many are relevant for young children.

“For K-to-5, it could be, like, asking permission before touching someone’s things,” Erdheim said. “It’s consent education. Or if someone takes something from you, how do you communicate about it?”

The toolkit also contains recommendations on the standards that consent education should meet. It contains links to videos, books, and websites that may be helpful in teaching about these topics, as well as community resources for violence prevention, mental health, sexual health, and LGBTQ-plus advocacy. .

Disclosure: The Michigan Organization for Adolescent Sexual Health contributes to our fund for reporting on health issues, LGBTQIA issues, reproductive health, youth issues. If you would like to help support news in the public interest, click here.