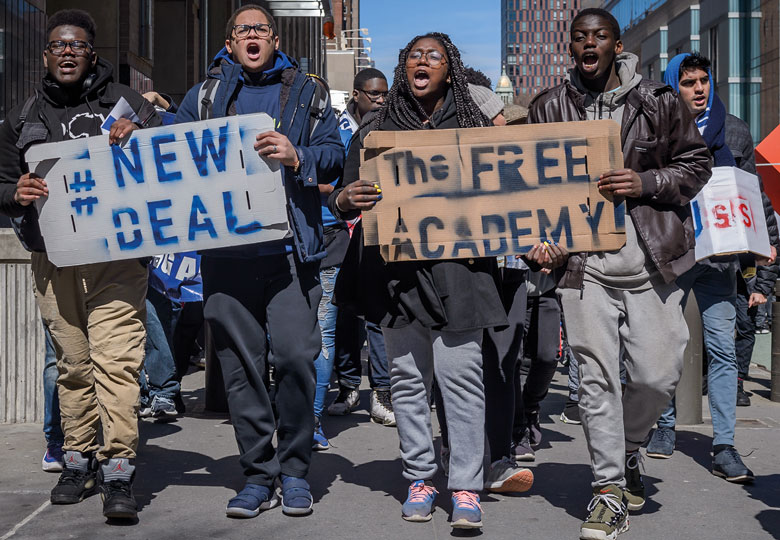 The American public appears increasingly supportive of the idea of ​​taxpayer-subsidized higher education, even as the Biden administration and Congress take a tentative approach, sociologists say.

The researchers, Brian Powell from Indiana University and Natasha Quadlin from the University of California, Los Angeles, have just completed a book – Who should pay? Higher education, responsibility and the public – that they expected from American intransigence on the issue of funding for post-secondary education.

But as they scoured a series of opinion polls on the issue, Prof Powell said, they were surprised to see what they now recognize as a startling rate of growth over time in the share of Americans who believe that the government should bear the greatest responsibility for funding. college fees.

“These results were not at all what we had actually expected,” he said.

Their baseline data is a set of three public opinion polls and interviews – in 2010, 2015 and 2019 – aimed at testing this specific question about sharing responsibility for funding. The first showed that nearly two-thirds of respondents believed that parents and students should take primary responsibility.

That 2010 baseline reflected an attitude that was supposed to have been consistent for decades, Professor Powell said. But in the 2015 survey, that level dropped to 50%. Then the 2019 poll showed it below 40%. The proportion who believe government should be primarily responsible for college costs increased over these periods, from 9% to 19% to 25%.

While that still leaves parents and students seen as the main bearers of college costs, the rapid pace of change over the past decade suggests an imminent reversal of that balance, Prof Powell said.

The findings come, however, as the Biden administration struggles to convince Congress to enact its campaign pledge to make all institutions public two-year tuition-free. The administration has also refused on its own to implement Mr Biden’s vow in the 2020 election season to write off $10,000 (£7,782) per person in student loan debt.

Instead, the administration embarked on a series of targeted loan relief announcements. In its most recent episode, the US Department of Education identified another 40,000 borrowers who would receive immediate student debt forgiveness because they worked in eligible government jobs, and outlined new measures. to help at least 3.6 million other borrowers get closer to their forgiveness.

U.S. Undersecretary of Education James Kvaal — former president of the Institute for College Access and Success, a group founded to help reduce student debt — reiterated that stance while announcing the latest group relief. of 40,000 borrowers.

“We are working really, really hard where we have clear authority to help borrowers,” Kvaal said. Times Higher Education during a press conference. “And every day we are engaged in conversations about how to make these programs work better and how to provide borrowers with the relief they are entitled to.”

Your point of view: Biden