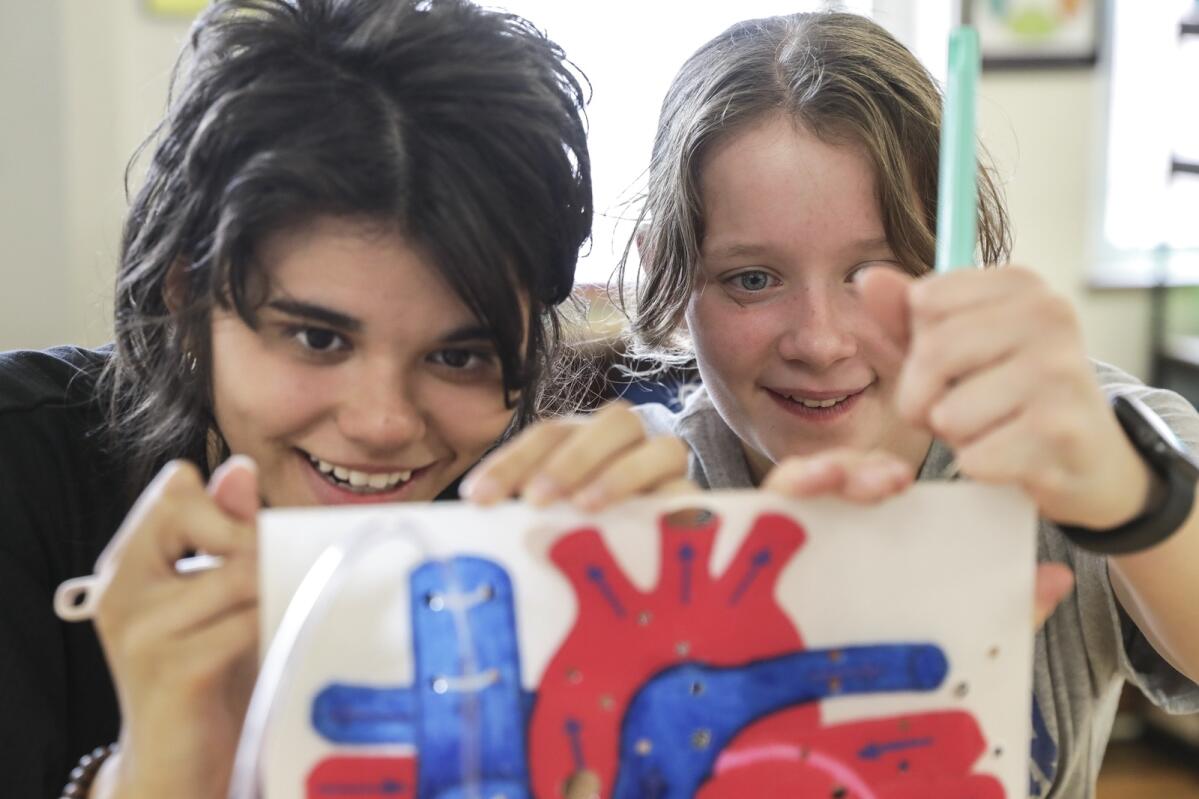 Eighth graders Maliah Richards (left) and Maya Patterson scratch the back of their model of the human heart Thursday at McKinley STEAM Academy in Cedar Rapids. The Magnet School adds a pathway for students to explore careers in the medical field. (Geoff Stellfox/The Gazette)

Johnson STEAM Academy student Lena DeSouza practices Thursday with her teacher, Catie Moritz, during her second violin lesson at Johnson STEAM Academy Magnet School in Cedar Rapids. The school, which focuses on integrating the arts, this year brought back private music lessons for students in grades three through five who want to learn keyboard, guitar or violin. (Geoff Stellfox/The Gazette)

Johnson STEAM Academy student Gionni Greer practices the violin during her private music lesson Thursday with her teacher, Catie Moritz, at Johnson STEAM Academy Magnet School in Cedar Rapids. Thanks to a portion of a federal grant, teachers there will receive professional development on how to incorporate the arts – such as dance, music and visual arts – into their classrooms. (Geoff Stellfox/The Gazette)

At another college, the Roosevelt Creative Corridor Business Academy, leaders dream of opening a student-run cafe as part of its entrepreneurial theme. Produce grown in the school’s indoor greenhouse could be used in food served at the cafe.

“All those times we said ‘if the sky was the limit’ or ‘if money was no object’ – now we’re looking at these projects as if they could really happen,” said Kate Riley , magnet coordinator at Roosevelt.

At McKinley, college students could walk away with certification in CPR — an emergency lifesaving procedure performed when the heart stops beating — and tangible experiences in health care. The school’s downtown location – across from Mercy Medical Center and near UnityPoint Health-St. Luke’s Hospital – makes it a good candidate for adding a medical pathway, Olander said.

Already, students are studying the human body by creating a model of the heart using a laser cutter and 3D printer.

The district is the first in Iowa to receive a federal grant for magnet schools — $14.8 million to be spread over the next five years. It will support improvements to four of the district’s existing magnet schools – Johnson STEAM Academy, Cedar River Academy, Roosevelt and McKinley and a new magnet high school called City View Community.

Investing in the arts and sustainability

The other magnet schools in the district use the grant to develop their themes.

Johnson STEAM Academy focuses on integrating the arts. Already, the school has brought back private music lessons this year for students in grades three through five who want to learn keyboard, guitar or violin. Although there is a “small fee” for these courses, scholarships are available for students who need them, said Sarah Jones, magnet school coordinator at Johnson STEAM Academy. Instruments are also provided while students learn.

The school also plans to launch an artist-in-residence program, bringing in musical or visual artists for a short period each to provide hands-on learning.

Through the grant, teachers will benefit from professional development on how to incorporate the arts – such as dance, music and visual arts – into their classrooms.

Teachers at Cedar River Academy — which has a sustainability theme — will receive professional learning to become “sustainability experts” with help from the grant, said Liz Callahan, magnetic school coordinator at Cedar. River Academy.

Students continue to learn about sustainability with many field trips. Last month, the students visited the urban farm at Matthew 25 in Cedar Rapids, where they learned about urban agriculture and tasted kale, Swiss chard and grapes. Grant funding will help pay for transportation for these trips.

A few years ago, the students became the first in the district to compost schoolwide. The majority of materials discarded by students and staff are recycled or composted.

The district plans to open its first magnet high school next year, called City View Community School, which will expand its offering beyond elementary and middle schools. The location of the school has not been announced, but the district said it would be downtown.

The federal grant will be used to help get the school off the ground. The district is setting aside money to start the school and has received other grants, but it will eventually be funded through the usual per-pupil student aid.

At City View, high school students will engage in project-based learning. Up to 200 mostly rising 9th and 10th graders will be able to enroll in City View for the 2023-2024 school year. The school will eventually serve up to 400 students from ninth through 12th grade. The other high schools in Cedar Rapids have between 1,300 and 1,700 students each.

A lottery for City View is currently open and the magnet elementary and middle school lottery will open at 8 a.m. Monday.

Students who live in the resident area of ​​the magnet do not need to enter the lottery to register.

Editorial: Tests reveal impact of lockdown on US students