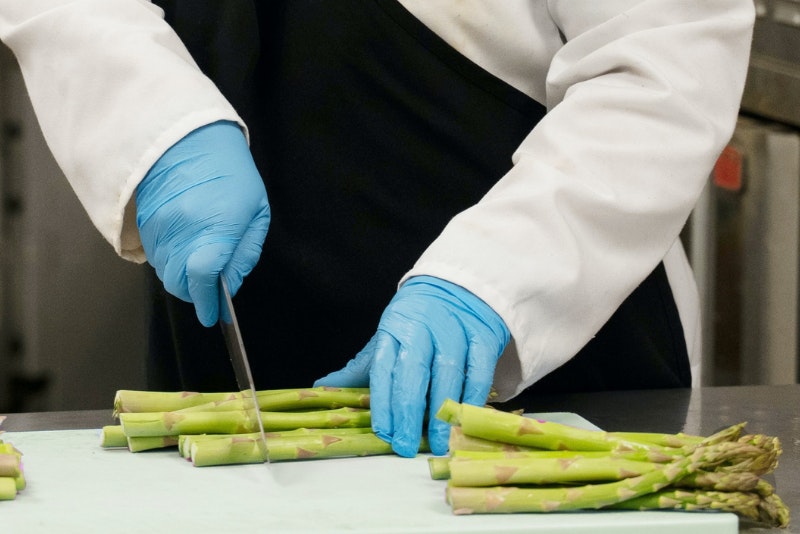 For decades, businesses have relied on community colleges to help train the workforce. But now the community college system faces a multimillion-dollar shortfall and an uncertain future at a time when businesses grapple with labor shortages. Earlier this month, the culinary school and other business programs were due to close. They got a reprieve, for now. But the financial difficulties, for years to come, did not disappear.

Elizabeth Petrea was relieved when she learned the culinary program had been spared. She graduated last December. But she plans to return for more baking and pastry training.

Petrea came to Seattle Central after a 22-year career in the Navy. She said she was drawn to the program by the instructors’ knowledge and passion.

“You can hear it in their voices,” Petrea said. “They are, despite being in the industry for 20-30 years, still excited to cook everyday like they were on day one. They are an incredible group of instructors.

For decades, community colleges have served a variety of students, ranging from people like Petrea looking for a career change, to students heading for a four-year degree, to those who prefer to focus on the technical skills offered by culinary, carpentry or maritime programs.

These students provide about 30% of college income.

But enrollment has been declining since 2010, according to recent analysis by the Washington State Board for Community and Technical Colleges. This decline occurred around the time the economy was recovering from the Great Recession.

He notes that when things are going well, students find jobs and tend to put their studies on hold.

“Then as the economy gets worse and unfortunately there are layoffs, unemployment goes up, they tend to come back to us and look for further training and find a way to get more skills” , Halladay said.

And it’s not just the economy that has affected enrollment. The number of secondary school students taking university courses has also decreased.

In the past, colleges could keep themselves afloat on revenue from international student enrollments. But at a recent budget forum, Acting President Yoshiko Harden noted that foreign policies under the Trump administration have put a damper on that.

“It was much more difficult to get student visas than before,” Harden told the audience. “There was apprehension about traveling abroad for studies given the rhetoric coming out of the country.”

Then, to top it off, the pandemic hit.

As college officials discussed how to close a projected $13 million budget gap, outside the meeting, students staged a strike, banging pots in protest at the proposed closures.

“It’s about getting the word out and finding the money,” said Natalie Lyons-Cohen, one of the cooking students who marched. “Some of the faculty and administration do great networking, talk to people who can make great financial donations, because I think it will take a public-private partnership to make sure the gap is completely fulfilled, not just for one year, but for the next 10 years.

To highlight the importance of the culinary program to the industry, the students designed posters to display in the restaurants where they work or in the companies that have hired graduates.

Choi Halladay, from the board, said the financial challenges and resulting outcry have sparked discussions with state and local elected officials about sustainable funding, particularly for trade programs.

“There is now, I think, a much more open dialogue about how we handle funding for programs like this,” Halladay said. “They may not be huge, but they are essential, and they may be even more vital than anyone realized in keeping our economic infrastructure running.”

This is especially the case at a time when many industries are struggling to find workers. There are no immediate solutions. But there have been some tentative moves. The city of Seattle recently donated $1 million to the Maritime Academy, which trains students in trades like commercial fishing and sailing, enough to keep the program open through the upcoming school year.