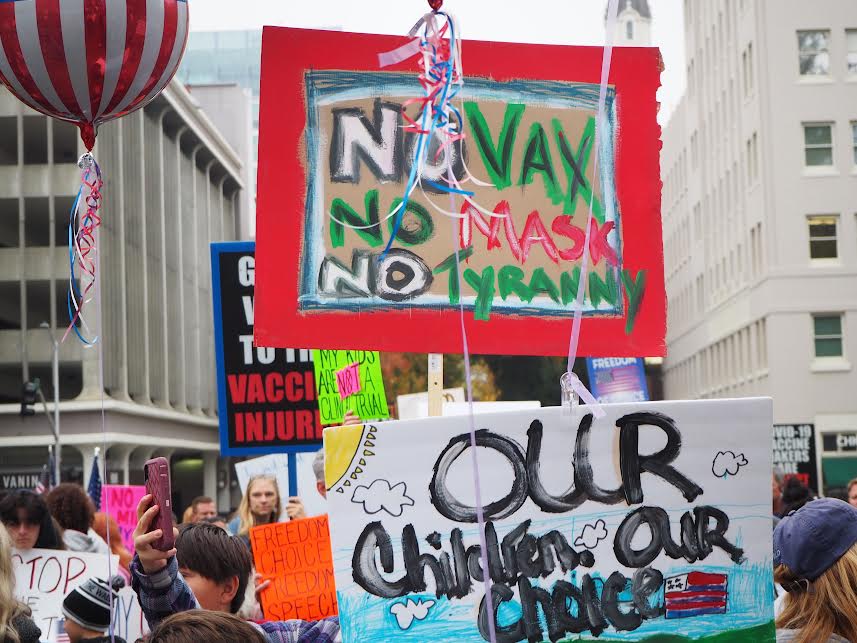 School disembarkation: “The government is not a co-parent” rally at the State Capitol on Monday

The “The Government Is Not a Co-parent” rally at the California State Capitol on Monday was large. The Statewide School Walkout was exactly what it pretended to be: Moms, dads, children, grandparents, teachers and concerned citizens turned up en masse on Capitol Hill armed with homemade signs to protest against public schools and teachers’ unions, which pushed to keep schools closed, forced children to remote education and wear masks all day, and now Governor Newsom’s mandatory vaccine for children.

“Medical freedom” was / is at the origin of the rally. The Globe spoke to parents whose children are otherwise fully immunized, but said Governor Gavin Newsom’s COVID vaccine mandate is unconstitutional and a violation of their medical freedoms.

At Monday’s rally, Matthew Oliver, owner of the House of Oliver wine lounge and restaurant in Roseville, Calif., Spoke at the rally. Oliver, a father of five, has protested against business and school closures since the start of March 2020. “Welcome to the parent revolution,” Oliver said to cheers from the crowd.

“They tried to shut us up and tell us we didn’t matter,” Oliver said. “They tell us our voice has no power, but it does. Our governor and our legislature must hear our voice.

Oliver told the crowd that “now is the time to stand up” otherwise “silence is approval”.

Ponderosa High School teacher Michael Wilkes was put on paid administrative leave after teaching classes without wearing a mask. Wilkes, a father of three, gained national attention for his stand.

Wilkes said it is important to stand up for individual freedoms and our love of freedom. “They are trying to divide us over our own children – the tyranny of the powerful over the powerless – bow to the state or they will take everything from you.”

In a recent interview with WCSI, he said he encourages debate in his classes. “He said parents were getting more and more tired of these warrants and cited last week’s protest in Sacramento as evidence,” WCSI reported. “The protest (October 26) included parents who opposed Newsom’s vaccination mandate. “

Wilkes said the district is investigating and he may lose his job.

At the heart of the protest was Lexi, a high school student from Ponderosa, who said it all started on a day when she lowered her mask under her chin, as many other students did. It went without incident, so she stopped wearing it altogether and came to school without a mask for a whole week before one of her teachers sent it to the school administrators. Lexi said she walked into the office and none of the administrators wore a mask. She called them, but they told her that they only had to wear masks when the students were present.

She had little choice but to comply with the mask’s mandate or she could transfer to e-learning. “My education should be about more than a mask,” said Lexi. The administrator told him he was okay, but there was nothing he could do without losing his job. Lexi told her to stand up for herself and the students, but the fear of losing her job was too great. “It’s okay, I’ll defend you too,” Lexi told her school administrator. She left Ponderosa High School.

Rebecca Friedrichs from “For Children and the Country” and Friedrichs v. California Teachers’ Association, spoke at the rally about the dangers children face in public schools. “Even great teachers are vulnerable,” Friedrichs said. She spoke about the radical agenda pushed on children through schools. “We have to get out of the unions.

“They hate God, they hate you,” Friedrichs said. “But they are afraid of you! “

Friedrichs said many teachers are unaware of the 2018 Janus v. AFSCME, ruling that public employees can no longer be required to pay union dues or fees as a condition of employment. On its website, Friedrichs offers a “Union Opt Out” resource page for teachers wishing to leave the teachers’ union.

Boomer and Kima Bennett, parents of three, and founder and student director of JesusFollowr University spoke passionately about faith and family, and the importance of opposing the tyranny of government to protect “our children, the innocent “.

The groups involved in the protest are The Independent Women’s Network which organized the national rally, Our Children, Our Choice, on Facebook and Instagram: @ our.children.our.choice

How is Federal Coronavirus Response Funding Spent in the Boulder Valley School District?