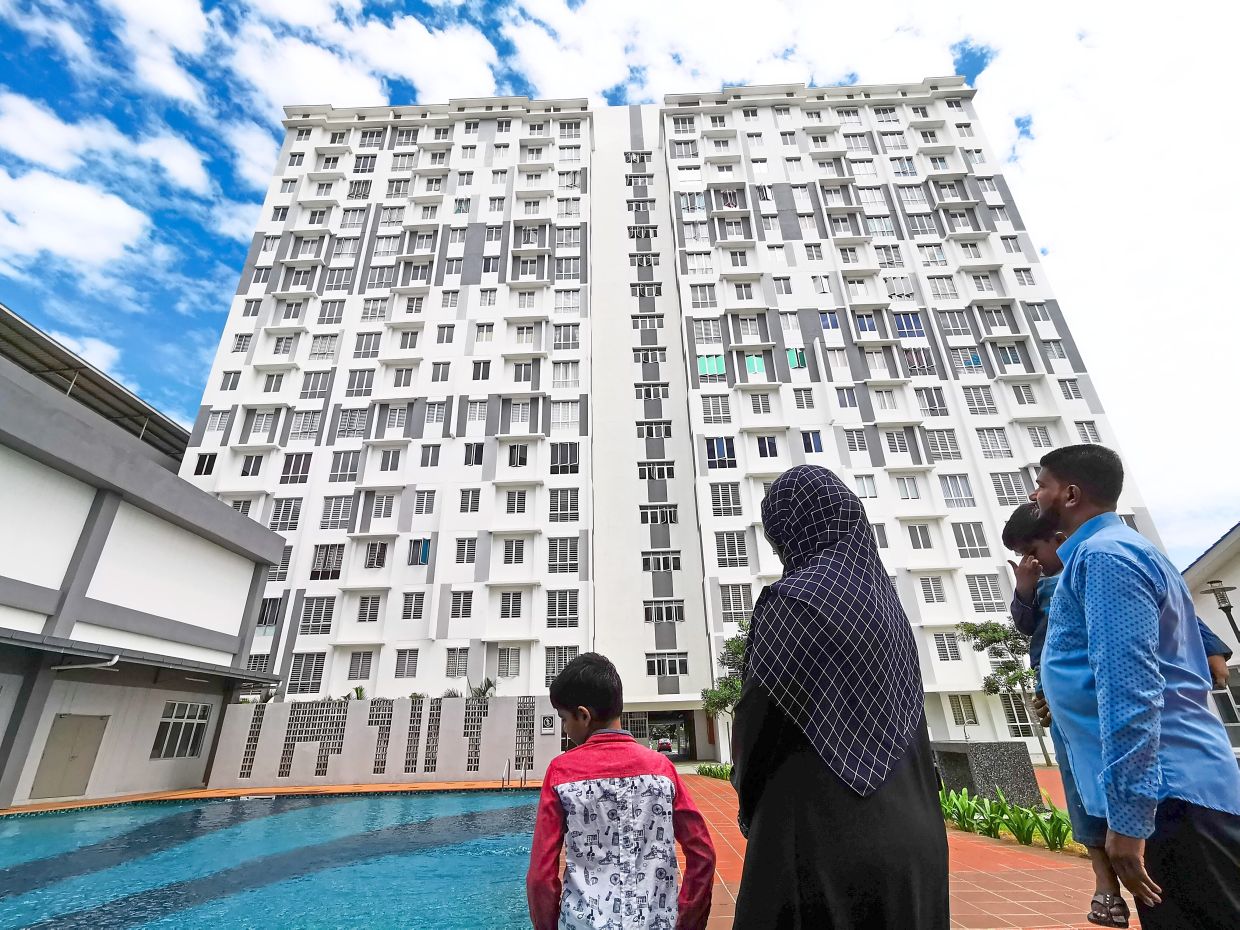 For every 1,000 affordable houses launched in the Klang Valley, there are said to be between 10,000 and 60,000 applicants for the houses. There is a clear shortage of such accommodation, especially in urban areas.

It’s no secret that property prices have gone up several times over the past 20 years while wages have not kept up. According to the government’s own reports, starting salaries (after adjusting for inflation) have actually fallen since 2010, even for those with a university education. This situation has been aggravated by the economic slowdown linked to the Covid-19 pandemic. “Even though I got an engineering degree, I have no choice but to work as a delivery courier. There is no way I can afford to buy an apartment in the city,” lamented Azlan M, who was reluctant to give his full name.

“Even if I can find a walk-up apartment of say RM250,000, I can’t find the 10% deposit because everything I earn runs out at the end of the month.”

Speaker Irene Kiew commented: “For the M40, we often have parents helping out with the down payment because the kids haven’t worked long enough to save that lump sum. To compound the problem, more than 600,000 households from the M40 group fell into the B40 group, as reported by Bernama.

“It’s not easy for the younger generation to buy property these days. They mostly rent an apartment or even just a room,” banker KS Wong said.

Indeed, will we end up like Hong Kong where young people are forced to rent for the rest of their lives because they cannot afford the ever rising property prices?

To address these concerns, Prime Minister Datuk Seri Ismail Sabri Yaakob said Bank Negara will need to review its funding models to facilitate home ownership for the B40 and M40 groups, in line with the “One family, housing”. This was one of the decisions taken at the meeting of the National Affordable Housing Council (MPMMN) on February 10, which he chaired.

“This is to ensure that financial institutions allow easier financing for B40 and M40 groups to own social housing units (PPR) and other affordable housing. The focus will be on direct purchase and rental with option to buy,” said Ismail Sabri.

He added that the MPMMN meeting also discussed strategies to build 500,000 affordable housing units across the country during Malaysia’s 12th plan. This will involve the federal government, state governments and private developers.

“The government is committed to ensuring the provision of adequate and quality affordable housing to meet the needs of a growing population,” he said.

Many ideas have been proposed before and it is timely that the government is now actively considering how to reform the system.

For example, in May 2021, the Better Malaysia Foundation proposed that lenders provide 100% financing to remove the burden of large down payments. About 60% of B40 buyers are rejected for bank loans due to poor credit scores, the foundation said. So, he suggested that the government should guarantee these loans to overcome this problem.

Professor of Economics at the University of Science and Technology Malaysia, Dr Geoffrey Williams, recently suggested that banks offer two-generation loans (at lower installments) that take into account the ability of members to pay. family, rather than a fixed loan repayment schedule.

Last November, Professor Ahmed Razman Abdul Latiff, an associate economic analyst at Putra Business School, urged the government to come up with alternative Islamic financing options that are not for profit. He came up with a financing concept called Musharakah Mutanaqisah which has no interest charges. Under this, a co-op or government agency will jointly acquire a property with a home buyer.

As they pay monthly rents, their share of ownership in the house will increase. Unlike bank loans, if the buyer defaults, the proceeds from the sale of the asset will be shared between the cooperative and the buyer according to their respective ownership shares.

“It allows people to pay the rent little by little, which will eventually become the owner of the house,” said Ahmed Razman.

Another problem is getting to work. Dr Rosli Said from the Faculty of Built Environment at Universiti Malaya said in December 2021 that houses on the outskirts of urban centers were cheaper. But people are reluctant to settle there because of the distance from their place of work.

Ismail Sabri said the new PPR projects will look at connectivity, both public transport and broadband internet access. He said that the Ministry of Housing and Local Government (KPKT) has introduced the Home Ownership Program (HOPE) to ensure a more comprehensive ecosystem for housing development and finance, as well as programs that can help Keluarga Malaysia (the Malaysian family) to own houses.

The government is also committed to having more affordable housing for the younger generation and for the M40 group in suburbs and small towns, he said.

Other concerns raised at the MPMMN meeting were the rising costs of building materials and cartels controlling the construction industry. Ismail Sabri said KPKT and the Malaysian Real Estate and Property Developers Association (REHDA) have been tasked to look into these issues.

The Prime Minister added that the federal government will provide grants, while state governments will allocate land to ensure that PPR and affordable housing are sold at reasonable prices.

The most common money is in relationships