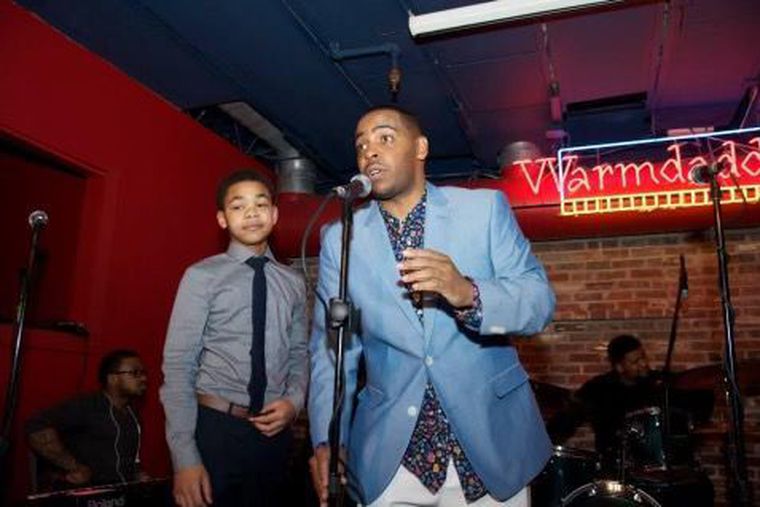 It was a rowdy adult night.

Writer Mister Mann Frisby celebrated his 40th birthday at Warmdaddy’s during one of his epic jam sessions. Drinks flowed like water and people ate soul-food dishes like catfish fingers, pan-fried macaroni and cheese, and cabbage with cabbage and smoked turkey. In the middle of it all was Cam Anthony, 13, standing on stage in a dress shirt and tie.

Philly audiences are notoriously tough, so it must have been intimidating for someone so young. But he grabbed that mic like a pro and began to hear the plaintive lyrics to Sam Cooke’s legendary civil rights anthem, “A Change Is Gonna Come.” My first thought was, “What are you saying about this?” Then my jaw dropped as the words seemed to come out of his soul: I was born by the river, in a small tent, and just like the river I have been running ever since. It’s been a long time, but I know a change will come. Oh, yes it’s ok …

Needless to say, Anthony put us together. We applauded and applauded. We knew we had just witnessed something special and that a star was among us.

“Playing jam sessions made me feel comfortable being on stage,” Anthony told me last week. “Playing there, it was such an intimate setting that you couldn’t help but be vulnerable while playing and I think that’s very important when it comes to the stage.”

Tuesday when it was announced he had won NBC season 20 The voice, it was a magical moment, with confetti and big hugs. I screamed and screamed so loud my husband came running.

Anthony’s victory, however, was not just a victory for him. It was also a much-needed moment of well-being for a besieged town tired of burying its young people and for all the people who helped Anthony along the way, including Frisby, who learned from him in 2013 during a search on YouTube. for singing talent.

“Mister’s jam sessions were instrumental. I think it gave Camren a taste of what it was like to be a professional, ”recalls Lamar Sherman, Anthony’s dad. “[Cam] had to be prepared. He had deadlines and although Mister gave him a lot of freedom to do whatever he wanted because of his voice, he got that big part of it at an early age. So when is the time to do The voice, he had to practice, he had to do sound checks, know what he was singing, know the words. Mister’s jam sessions for three or four consecutive weeks [helped]. “

So did being signed at the age of 14 by Dr. Dre’s Aftermath Entertainment, playing for former President Barack Obama and First Lady Michelle Obama at the 2014 White House Easter Egg Roll. , and win on Fox now canceled. Showtime at the Apollo in 2018.

“He really honed his skills in Philly with older people who have a certain expectation of soul singers. He was barely in college, ”Frisby recalls. “There’s a whole army of people coming to the shows, following his progress.”

The second oldest of five, Anthony, 19, comes from a family of musicians in North Philly. His mother, who is also a singer, first noticed Anthony’s voice when he was just 4 years old and he was singing a Folger’s Coffee jingle. His first performance was at Crossroads Baptist Missionary Church when he was about 7 years old. Around the age of 12, he received so many requests to sing that his parents decided to homeschool.

“He really wants this,” said Melissa Hayward, Anthony’s mother. “One of the things I used to say to him when he was younger was, ‘Whatever you practice at home or to perform, that’s what’s going to show up on stage.’ Cam has therefore developed this need to make sure that even in training, even in game, he gives you everything, and that is what he does. He goes out on stage and he gives you everything he practices and even more sometimes because he is able to think musically while he sings.

Shortly after his big win on Tuesday night, Anthony took to his Instagram page live to speak with his mother and thank fans for voting for him. I was glad that even in the excitement of it all, he remembered Frisby, whom he invited to join him during the livestream. It was a loop moment for both of them.

‘Married at First Sight: Couple’s Cam’ Premieres on Lifetime: How…