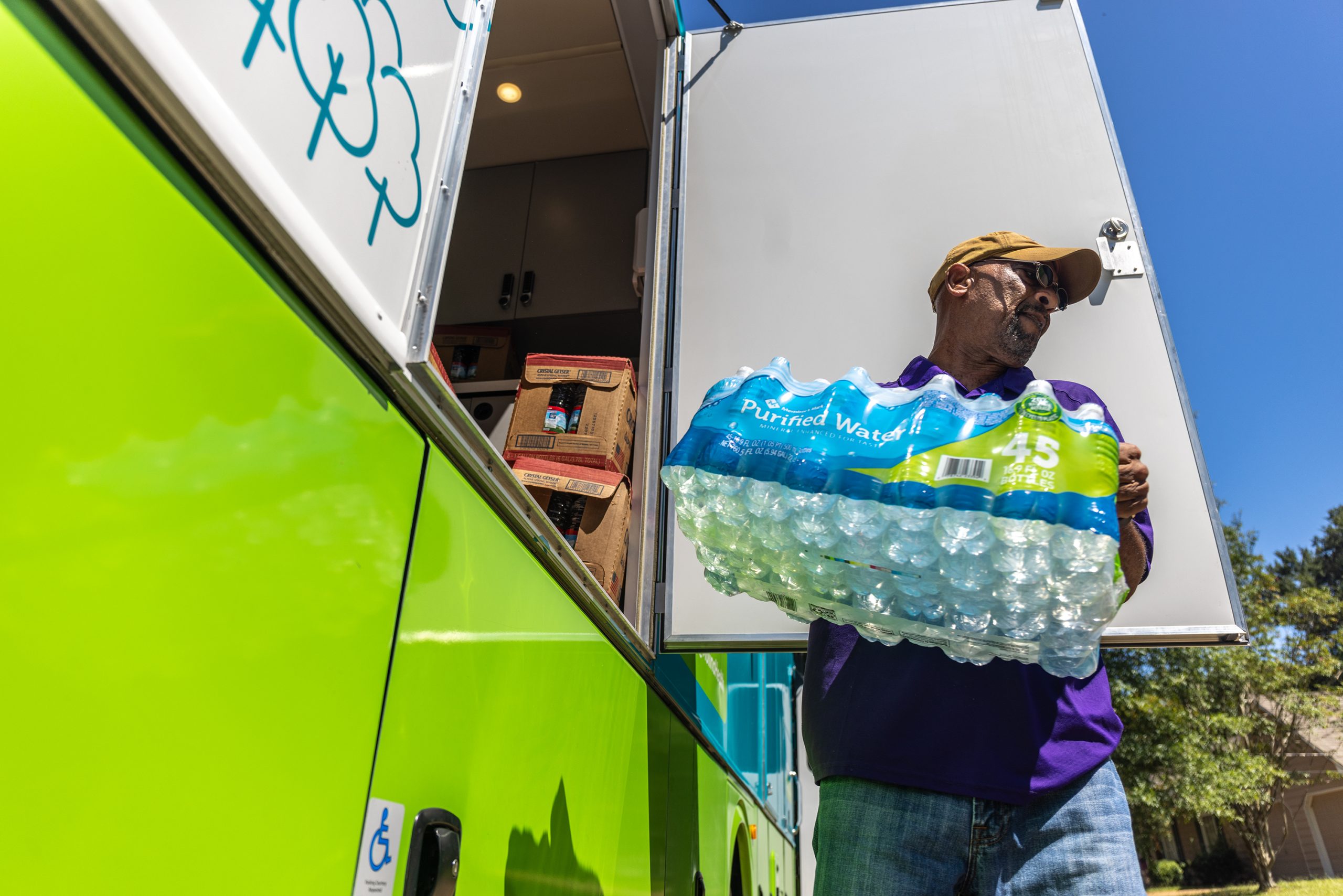 Many students are using portable showers and toilets as Jackson’s water emergency causes little to no water pressure on city campuses, forcing schools to move classes online and go without The air conditioning.

The administrations of three Jackson-based colleges and universities — Belhaven University, Millsaps College and Jackson State University — do not know how long these emergency measures, such as limiting dining hall hours and handing out bottled water, will last.

“Things are fluid, no pun intended,” Jackson State University director of campus operations Michael Bolden said at a town hall on Tuesday. “Things scale up and down depending on how the system reacts to what is happening on the main sites.”

Tougaloo College is unaffected by the city’s water emergency, a spokesperson confirmed to Mississippi Today, because it has its own well system.

At Belhaven University, located a few blocks from the JH Fewell Waterworks, classes did not take place on Tuesday. The administration has been monitoring the situation closely in meetings throughout the day and hopes to have a better idea of ​​how to proceed by the end of the week, David Sprayberry, Belhaven’s director of public relations, told Mississippi Today. .

Currently, some buildings are running out of water or have low pressure on upper floors. The university has limited catering service to resident students and distributes bottled water for drinking and non-potable water for flushing toilets.

“Due to the uncertainty, we are taking the following actions for TOMORROW ONLY,” Belhaven University President Roger Parrott wrote in a letter to campus.

Parrott wrote that he hoped to have more information for students by Tuesday evening, but that because Belhaven University is located “downstream” he expects the campus to be among the first parts of the city to restore water pressure.

“Fortunately, our campus location is ‘downhill’ and we keep the water flowing longer than other parts of the city,” Parrott wrote. “We will probably be one of the first parts of town to restore water pressure when the plant is fixed.”

Colleges and universities are actually small towns, providing thousands of Jackson students with housing, food, security, health care and 24-hour utilities. Water does not just affect student learning, but every aspect of campus life, from showering in dorms to buying hot meals on campus.

UMMC placed its campus under fire watch, but it’s unclear if other colleges in Jackson are doing the same Tuesday afternoon.

“I don’t know the answer to that question,” said Annie Mitchell, vice president of marketing and communications at Millsaps College. “We are counting on the city for that.

At Millsaps, a small liberal arts college on a hill in central Jackson, the emergency management team meets twice a day at the start of the second week of classes, Mitchell said.

By Tuesday morning, the water pressure was back above 30 PSI, allowing the students to flush the toilet.

“Millsaps is one of the highest points in the city, and our residence halls on the second and third floors, just with gravity, it’s harder for these students to flush,” Mitchell said.

Showers and portable toilets had been installed on Monday evening, but Mitchell said she did not yet know how much it cost the college. The university’s air conditioning was unaffected, and Mitchell said while there was a wifi outage on campus, it wasn’t due to the city’s water emergency. .

“Our supplier, they had a global outage, it was just a really unfortunate time,” she said.

Millsaps has also requested portable hygiene stations from Aramark, its food supplier, so that catering services can continue, but with pre-packaged food and at limited hours.

As for classes, Millsaps went virtual Monday around 11:30 a.m. after the drop in water pressure was noticed, Mitchell said. Students and faculty have the day off today in case they need to go home, and classes (except for labs) will be virtual for the rest of the week.

“We just wanted to make sure that we gave our students as much choice as possible in terms of where they were going to be, because we weren’t entirely sure about the impact of water, at that time- there on campus services like doing laundry, flushing the toilet, taking showers, that sort of thing,” she said.

Nearly three weeks ago, low water pressure forced the university to delay moving in dorms; JSU is now moving classes online for the rest of the week and plans to resume in-person by Tuesday next week.

IHL’s Office of Risk Management has contacted JSU and “stands ready to respond to any needs identified by the university,” Blanton wrote in an email.

Many dorms don’t have running water on the upper floors; JSU delivered bottled water to students last night and this morning. There is no laundry service to provide water for students and the library is closed. The university is working to bring water for meal preparation in the dining hall and have portable showers in place for students by tomorrow.

The students had multiple questions about whether it was safe to live in the dorms. A parent asked if they should prepare to take their children home.

“You can come, but as we mentioned, you need to be aware of the ever-changing situation that’s going on and the impact on Jackson’s condition – we’re not going to turn away a student who comes in, but it’s really up to you point and your comfort level of whether you arrive on Saturday,” Brown-McClure said.

During the town hall, Brown-McClure repeatedly told students that the campus was not in an “evacuation situation.”

“Once again, the campus is open; we are not closed,” Brown-McClure said. “You can always hang around, you can always walk in the square. I just looked outside. It’s a very beautiful day. Please engage with your peers…we just need to be aware.

The university cannot make any adjustments to tuition or housing because those rates are set by the state, Brown-McClure told students.

Administrators also answered several questions from students about efforts to get JSU to have its own water system, a goal that became especially urgent after last year’s ice storm froze the water that flows towards the university. Jackson’s water problems caused periods of low and no water pressure on the JSU campus as early as 2010.

Hudson told students that JSU was actively working to study the feasibility of building its own water system on campus. He said there was state and federal funding available to help the university build its own water system, but he didn’t go into specifics.

The University of Mississippi Medical Center uses its own water source for approximately 90% of the campus, with the remainder coming from the city.

In an email to the faculty senate last week, Bolden wrote that the university had “initiated funding requests to determine the best option to meet” its needs, including preparing a plan for a alternate water supply to serve JSU. This is “a primary and recurring conversation with the Department of Finance and Administration, members of the MS State Legislature, and City of Jackson officials.”

Millsaps is also looking to build its own well system due to the impacts of the 2021 ice storm on students and campus. The university is currently in the fundraising phase of the project.

Mitchell said that while Millsaps didn’t find a “direct correlation” between the ice storm and a drop in enrollment, Jackson’s water issues are hard on students, faculty and staff.

“Part of the beauty of going to Millsaps is that we have a great residential experience,” she said, “and the water is definitely a key part of that.”

Republish our articles for free, online or in print, under a Creative Commons license.

Are you concerned about Jackson’s water crisis?

Please take a few minutes to share your thoughts.