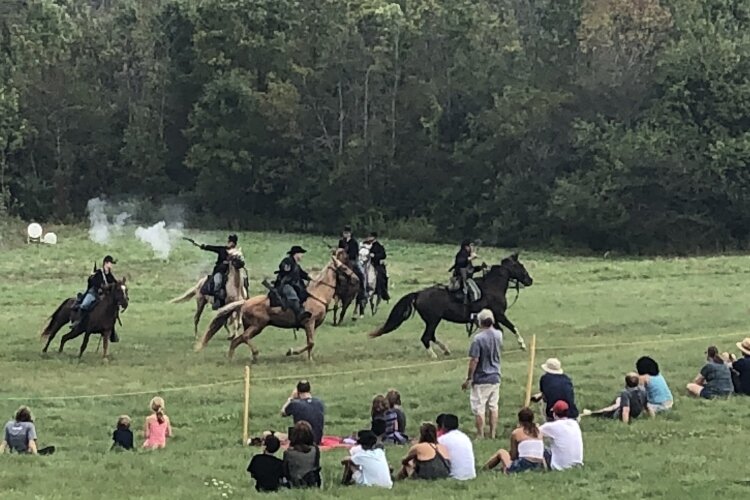 The Van Raalte Civil War Muster is back and, with the help of a two-year, $ 51,000 grant from the Andrew W. Mellon Foundation and Hope College, will reach even more people.

“This allows us to take the gathering to the next level,” event president Rick Veenhoven said of the grant.

The theme of this year’s gathering is the Underground Railroad. The pageants will represent Harriet Tubman and President Abraham Lincoln.

The grant enabled the gathering to attract nationally recognized talent.

Actor Fritz Klein has played the role of Lincoln in 38 states as well as overseas. He performs at the new Abraham Lincoln Presidential Museum as well as in many other venues across the country.

He portrayed Lincoln for the reenactment of Lincoln’s maiden voyage by the National Park Service, traveling from Springfield to Washington, DC. in 2011, and performed in front of some 5,000 people en route. He has also played Lincoln for National Geographic, Discovery, History Channel, feature films and the Lincoln Home National Park award-winning film “Journey to Greatness”.

Although Klein bears a striking physical resemblance to Lincoln, it is his attention to historical accuracy, his acting skills and his humor that helps him identify with the audience who walk away feeling like they have was in the presence of the 16th president, himself, according to the organizers.

The 160-acre historic park was once the farm of Benjamin Van Raalte, Civil War veteran and son of Dutch founder AC Van Raalte.

The town-owned property includes Van Raalte’s original farm and barns and is listed in the National Register of Historic Places.

The 12th Annual Gathering will feature reenactments of the first Battle of Bull Run as well as two days filled with impressions of historical figures, performances, medical scenarios, vintage vendors and a church service from the days of the civil war. Organizers canceled the rally in 2020 due to COVID.

The camp opens to the public at 9 a.m. on Saturday, September 18. Military exercises and impersonator shows will begin shortly thereafter.

As part of the “There’s No Place Like Home” initiative, a 42-month $ 800,000 grant from the Andrew W. Mellon Foundation, professors and humanities students at Hope College work with Dutch leaders in the nonprofit sector to tackle ‘wicked issues’ such as food insecurity, affordable housing, access to healthcare, climate change, educational equity , social mobility and civic culture.

Discussion on the Underground Railroad

Established in February 2020 and administered by the college, the Mellon Grant aims, in part, to bring educational experiences to Hope College as well as to the wider Dutch community. A Friday night talk at Hope College will highlight the importance of the Underground Railroad and Michigan in the freedom movement.

Ashley Jordan, former Senior Director of Development at the National Underground Railroad Freedom Center in Cincinnati, and newly appointed President and CEO of the African American Museum in Philadelphia will speak alongside Associate Professor of History Hope Fred Johnson from 6 p.m. to 9 p.m. at the Winants auditorium in Graves. Hall, 236 College Ave. Participants are requested to wear masks.

Johnson points to contemporary unrest – movements and backlash – as one of the main reasons people should remember the Civil War.

“If you don’t know the cause, finding a solution will be that much harder,” he says. “Seeing the story as it happened gives us a better idea. The hope is that with these available tools, we can make better decisions in the crises we face today. “

The first three Mellon Community Partnerships were awarded and announced in Spring 2021 and included projects with Community Action House, Holland Museum and Ready for School.

The rally received the largest of three grants this round. The college is also partnering with the Ottawa County Parks and Recreation Department to explore the connection between nature and artistic expression and the First Assemblies of God Church in an oral history project that will examine the death of Jonathan Bracamontes in 2014 and concepts of the sanctity of human life, healing and reconciliation.

Blackpool’s 250 New CCTV Cameras That Can Talk To You