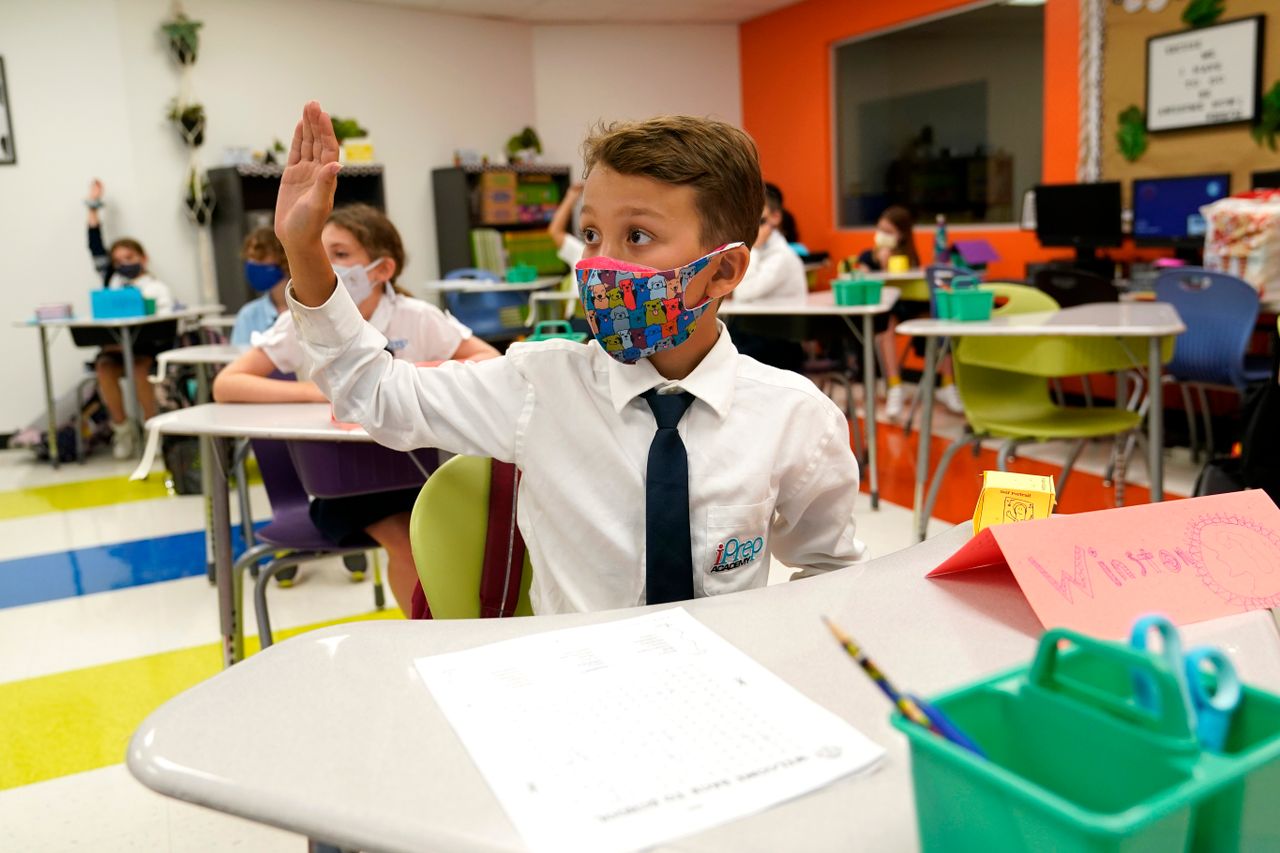 Fifteen educators and staff from the Miami-Dade County School District in Florida died from COVID-19 within 10 days between the last week of August and the first week of September, according to a tally by NBC 6 South Florida .

While it is not known when each employee contracted the virus, the deaths occurred after the district’s fall semester began on August 23 and amid a third wave of the pandemic that claimed the lives of dozens of Florida educators and staff who were forced to resume in-person learning.

One of the deceased Miami-Dade staff was Abe Coleman, a 55-year-old teaching veteran from the Liberty City neighborhood of Miami. Coleman was a third-grade math teacher for 31 years and director of a famous mentorship project for underprivileged young boys. The mentoring program, 5000 Role Models of Excellence Project, was designed to interrupt the pipeline from school to city jail and facilitate entry into university.

Along with the fifteen deaths in South Florida, which has recorded the highest infection and death rate since the start of the pandemic, countless similar reports are surfacing of schools seeing dozens of educators and staff members get sick or die from the virus.

A mother and daughter who worked as employees for the Miami-Dade District, Lilian Smith and Lakisha Williams, died within days of COVID-19 in early August before starting the semester later in the month. Smith was a teacher at Dr. William A. Chapman Elementary School and was also a seasoned educator with 45 years of district experience, while Williams had worked for the school system for 17 years and had recently been promoted to cafeteria principal.

Responsibility for these tragic deaths lies with the criminal policies of Republican Governor Ron DeSantis, who led a crusade against mask warrants and other school safety measures, as well as President Joe Biden and the teachers’ unions who have repeatedly promoted the lie that it is possible to reopen schools safely and that the lives and well-being of educators are not threatened by being placed in overcrowded classrooms with dozens of students where the virus has ample opportunity to spread.

Other neighborhoods are suffering the consequences of the catastrophic reopening campaign. On August 20, Seminole County Winter Springs High School teacher Mark Huaman died at the age of 58 of complications from COVID-19 just 10 days after the district reopened its schools. Huaman was a prominent figure in the district. In addition to being a highly regarded English teacher, he has helped win numerous state and national championships as the head coach of the school’s softball team.

The death of the beloved educator came as a shock to students and colleagues in Seminole County, which is grappling with its own health crisis sparked by the resumption of in-person teaching. According to the district scorecard, there have been a total of 1,775 cases of COVID-19 since school started on August 10 and 1,340 active quarantines. The large number of people infected or quarantined is reflected in nearly all of Florida’s 74 school districts, posing untold risks to students, faculty and staff that can only lead to an increase in the number of deaths as children continue to die. schools remain open.

The surge in public school deaths is just one expression of the rising number of deaths statewide that are fueled by the more infectious Delta variant of the coronavirus, which has made Florida a hotspot for the national resurgence of the pandemic. More than 6,600 people died from COVID-19 in Florida in August, making it the state’s deadliest month throughout the pandemic. An average of more than 213 people have died per day last month according to official figures, with many deaths in August yet to be added to the state health register. Since the start of the epidemic, the state has confirmed 3,354,836 cases of COVID-19 and 46,973 deaths linked to the virus.

Although the case positivity rate and hospitalizations have declined slightly over the past two weeks, the most recent data indicated a dramatic increase in weekly deaths, an indication that the lag between hospitalizations and deaths has started to widen. reduce as patients become more seriously ill. patients succumb to the disease. Last Friday, a report from the Florida Department of Health showed 2,345 deaths were added this week, an increase of 73% from the 1,727 recorded the week before.

With the virus cleared to run rampant, Florida now accounts for nearly a quarter of new COVID-19 deaths in the United States and has the second-highest per capita death rate in recent weeks behind the Mississippi. The most recent seven-day average of COVID-19 deaths in Florida, 346, stands at 23% of the 1,498 deaths recorded each day in the United States, according to COVID-19 data compiled by the Washington post .

Meanwhile, many doctors and media have pointed to the state’s failure to release consistent data on deaths by county. The state government and local public health officials have refused to provide information on deaths in local communities for more than three months, although this is common in almost all other states, making it difficult for the public to know which areas are most affected.

State Department of Health officials said it had not tracked and released this information because the county’s death toll can be found on the Centers for Disease Control and Prevention (CDC) website. ). However, the number reported on a CDC webpage underestimates Florida’s tally by the thousands, and the CDC’s largest map of county-level COVID-19 deaths shows only blanks for each of the 67. counties in the state.

Although Florida’s vaccination rate is slightly above the national average, one of the causes of the increase in deaths is the disproportionate number of elderly residents of the state who are particularly vulnerable to the virus. More fundamental, however, are the policies of Governor Ron DeSantis, which have represented nothing less than the strategy of collective immunity demanded by the financial oligarchy and co-signed by the Democratic Party. This policy dictates that the virus be allowed to run rampant without any restrictions on corporate profits, including rejecting school closures so parents can return to work to expand the personal fortunes of the ruling class.

Moreover, this policy also involves the rejection of even the most basic mitigation efforts such as masking and vaccination warrants. Right-wing Governor DeSantis led a witch hunt last week against school districts that defied his executive orders and sought to enforce mask mandates on campuses to deal with spiraling epidemics. Education Commissioner Richard Corcoran recently announced that the state is moving forward with plans to withhold salaries from members of school boards who have put in place mask requirements for students.

Last week, DeSantis appealed a judge’s ruling that the governor overstepped his powers by banning mask warrants in schools. The decision to appeal is a warning that no attempt will be made by the state government to even contain infections, even as deaths continue to rise.

In addition to repudiating masking efforts in schools, the governor has signed a number of reactionary laws in recent months aimed at removing all local health restrictions, such as banning businesses, government agencies and d ‘other institutions enforce vaccine or “passport” requirements for clients and patrons. The Florida Department of Health announced last week that it was fining anyone associated with an organization that violates state vaccine ban requirements.

While DeSantis’ fascist actions lay bare the homicidal policies of the ruling class in the event of a pandemic, the Democratic Party’s strategy has been to pretend to protect human life without opposing Republicans. Agriculture Commissioner Nikki Fried, the only statewide elected Democrat and potential candidate for governor of DeSantis next year, called the fines “an insult to free market principles that he claims to defend “. With DeSantis declining in popularity over the past two months and amid widespread public hatred of his policies, the only appeal Democrats have made to the general public is to vote Democrats in the next election of governor.

Likewise, the position of the unions, led by American Federation of Teachers President Randi Weingarten, has been characterized by the weakest critics while forcing the reopening of schools for in-person learning despite objections from teachers and teachers. parents. Instead of mobilizing its thousands of members in a serious struggle to oppose the dangerous reopening of schools, Weingarten has resorted to hollow blows against DeSantis.

While in Miami last Friday, the union bureaucrat, who earns more than $ 500,000 a year, said DeSantis was “more concerned about his political aspirations than the safety and well-being” of educators. In fact, Weingarten’s visit to South Florida, which followed the death of teacher Lillian Smith, was part of his tour of school districts across the country to promote the dangerous back-to-school campaign and tout inadequate mitigation measures as a solution to the pandemic.

Union officials like Weingarten, who tweeted in early August begging DeSantis to “put politics and pride aside and put safety first”, are more concerned about how best to bring teachers together in classrooms dangerous instead of fighting to ensure the safety of students and teachers and take what is necessary. measures to eliminate COVID-19.

To oppose the homicidal policies pursued by the two big corporations, educators, parents and students in Florida must create grassroots safety committees in their schools and workplaces and join the international network of committees that are working together. are fighting for science-driven public health. policies that will save lives and end the pandemic.

Collection of the land rate, widening of the necessary net tax – Opoku-Afari