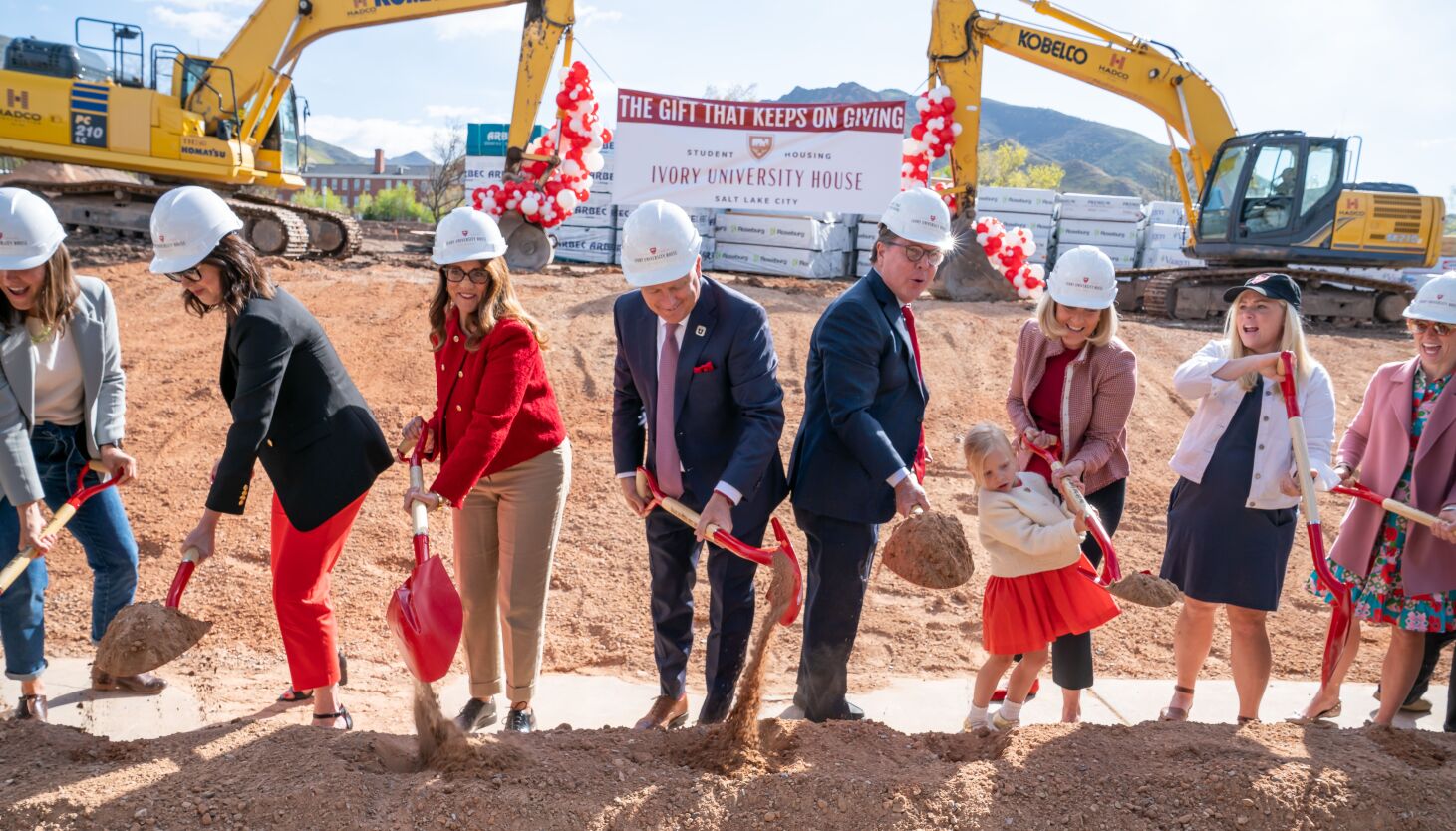 A groundbreaking ceremony on Friday marked the start of a unique collaborative housing project involving the University of Utah, the Clark and Christine Ivory Trust and The Church of Jesus Christ of Latter-day Saints that will serve students during an unprecedented housing crisis.

The three institutions are working together to construct Ivory University House, a four-building, 552-unit apartment community at the corner of Mario Capecchi Drive and South Campus Drive to add housing for U students. Rent paid will be donated to provide scholarships, housing allowances and internships for U students.

The first building is expected to be completed in the summer of 2023, where a church once stood.

“This innovative new model will transform the university’s housing situation and help serve thousands of students,” University of Utah President Taylor Randall said in a press release. “This type of partnership is key to our future growth, allowing us to provide expanded opportunities for Utah students.”

Ivory University House is a private facility and is not part of United States Housing and Residential Education. Nor is it governed by the church.

Clark and Christine Ivory first discussed the idea 10 years ago when he was a member and chairman of the university’s board of trustees.

They ended up with a public-private partnership between a public school, a church and a private foundation.

“Rather than making a one-time donation, we wanted to produce an ongoing donation for student support,” he said. “We take a $24 million investment and produce an annuity that will likely generate over $1 billion in impact over 99 years. This is the future financial model for supporting higher education and we are grateful to The Church of Jesus Christ of Latter-day Saints for making this possible through our ground lease of this prime property adjacent to the of Utah.

The Clark and Christine Ivory Foundation has provided more than 7,000 scholarships, internships, and mentorships at universities, colleges, and high schools across the state of Utah.

The need for student accommodation

The Ivory Foundation turned to student housing needs when the need became critical during the pandemic.

“Fall enrollment is expected to increase nearly 20% this year, and there’s a waiting list of about 3,000 students who have applied for on-campus housing,” Randall said. “Ivory University House cannot be completed soon enough.”

Randall considers Ivory University House part of his vision for a “college town,” which he unveiled in March.

As Ivory University House is built, the Clark and Christine Ivory Foundation will donate an additional $6 million in seed funding to build “Complete U,” a strategic plan to activate the campus throughout the year and engage students in experiential learning opportunities that lead to better student outcomes.

“Our foundation has always focused on students who need support the most,” said Christine Ivory. “Ivory University House will allow us to extend this focus in many ways, including providing housing assistance to students who need it most.

Along with Ivory University House, the university is in the process of adding approximately 1700 student accommodations, including:

What the Church Brings

The church agreed to demolish an existing, functioning chapel and provide the land to the foundation for 99 years under a commercial lease at market rate.

“Educational opportunities are extremely important to individuals and to society as a whole,” the church said in a press release. “The church is pleased to participate in this project, which will benefit college students at the University of Utah with off-campus housing and future scholarships.”

Presiding Bishop Gérald Caussé spoke at the groundbreaking ceremony. He said church and university leaders have long talked about the strategic value of the land to the campus.

“We intend to be part of this community and keep working to make it better and better, especially to bless this place with great students who will be strong in their commitment to helping their community,” Bishop said. Caused.

Randall said he and Governor Spencer Cox and others visited Arizona State University last fall to learn about its creative real estate projects. He said these lessons helped resolve some of the remaining issues with the Maison de l’Ivoire d’Ivoire project.

Henderson said housing is a key part of access to college education.

“I’m grateful for all of the efforts to remove the barriers that keep people from completing their education,” said Henderson, who recently graduated from college.

Henderson said she hopes the Ivory University House model will spread across the state.

Mendenhall said the project is perpetual and catalytic.

Most projects in the city have deed restrictions of 20 or 30 years, not 99-year lifespans. She expressed the hope that there would be a first step again in 98 years to remake the perpetual nature of the project.

“It will inspire people who live here and people who enter its sphere to think about the perpetual and catalytic projects they will create here in the state of Utah and around the world as they take their education and implement it,” Mendenhall said. “They will have integrated not only their educational experience, but also their hearts, souls and relationships, a community, a place of well-being and a place that has invested in them in a perpetual way.

“So it’s not just perpetual funding, it’s the people who are affected here. This is remarkable. It’s more than affordable housing. It’s so much more.

The Ivory University House project is funded by the Washington Federal Bank.