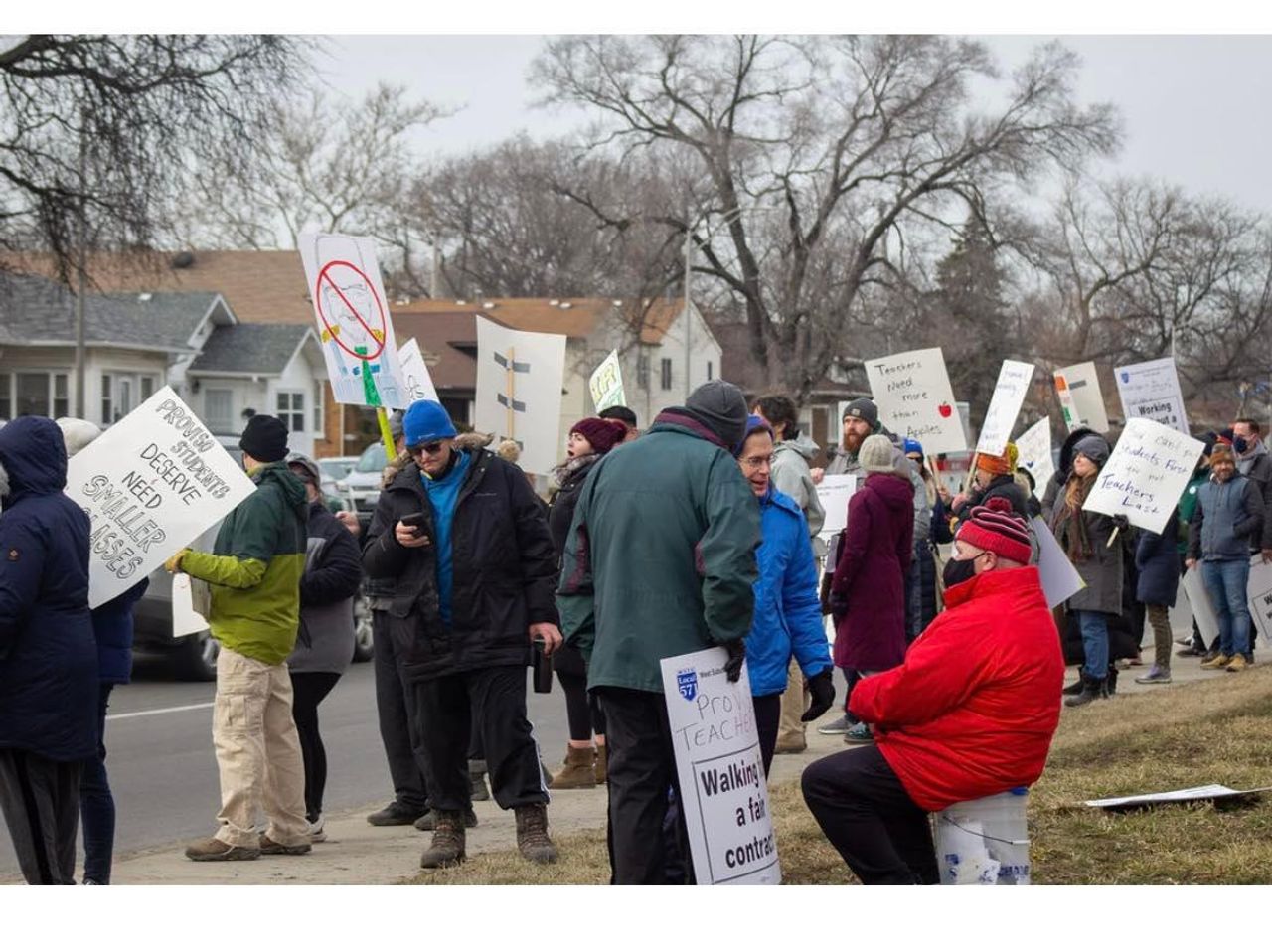 Chicago-area teachers and staff strike over wages and class sizes

About 280 teachers and staff in Maywood, Ill., went on strike Friday, March 4, the first strike in the Chicago district in 22 years.

Social workers, librarians and counselors joined teachers on the picket lines outside the three high schools in District 209. With no contract resolution in sight, classes for the schools’ 4,200 students have been canceled until March 11.

Neil Rutstein, a teacher at Proviso Math and Science Academy in Forest Park, told the Maywood News“It’s become a toxic workplace. It’s really hard to block those things out of your mind and still do your job effectively. It’s really stressful and not just for us. Last month the kids couldn’t deal with it either and left. I don’t know what they are waiting for. There can’t be a worse disaster than a school on strike.

Proviso Township teachers have, like their colleagues across the United States, been underpaid for years while working under intense pressure during the pandemic. The average teacher salary in the district would be almost 30% lower than the already insufficient level of educators in the Chicago area. The teachers have been working without a contract since July 2021, with the district taking a punitive hard line while repeatedly failing to show up for negotiations.

On Wednesday, American Federation of Teachers (AFT) President Randi Weingarten visited the strike, as well as another in Riverdale, Illinois. She was in the area trying to avoid and isolate the multiple teacher walkouts. On Wednesday, 3,000 teachers in Minneapolis, Minnesota, began a historic strike, the first in 50 years. No doubt under pressure from the AFT, a joint strike which was to take place in neighboring Saint-Paul was blocked. The walkout was abruptly called off and an agreement “within the district’s budget” was initialed by the union, according to school authorities.

Throughout the pandemic, Weingarten, the AFT and the National Educators Association (NEA) have insisted that teachers stay on the job, despite the death toll among educators, families and students. The murderous policy follows union efforts to block the mobilization of educators against the systematic funding of public education and the shockingly low wages and benefits that are now commonplace in schools across the United States.

In that vein, Weingarten presented the reservation’s situation as unique, rather than indicative of the dire conditions faced by educators across the United States. She claimed District 209 Superintendent James Henderson was simply guilty of “lack of leadership.” “People try to do their best and work together to make it happen,” she said. “As opposed to a superintendent pushing people to strike like they did at Proviso.”

Illinois Democratic Governor JB Pritzker has notoriously underfunded education at all levels. The centerpiece of his current budget is a $1 billion tax cut. Meanwhile, schools are reeling from a lack of support at every level, from special education funding to school nurses and mental health professionals.

The reserve is a good example. Staff have been working without a contract since July 2021. After months of negotiation and federal mediation, the district increased its wage offer from 2% per year to 9% over three years. Under conditions of 7.9% inflation, the offer approximates a 15% pay cut over the life of the contract.

The Proviso Teachers Union (PTU) demand is a meager improvement, 12.75% on the three-year contract, a pay cut of around 11%, only peripherally offset by ‘longevity’ bonuses for all teachers $1,250 the first year and $600 the second year.

In line with the AFT/NEA’s sabotage of the school workers’ unity of struggles, PTU-affiliated unions in West Suburban Teachers Union Local 571 have rejected the joint strike even though they are also working without a contract. . This includes the Proviso Custodian and Maintenance Union, affiliated with the Service Employees International Union (SEIU), and the Proviso Support Staff Council covering support service employees including clerks, teaching assistants, room supervisors to eat and the nurses.

Brandon Kujawa, English teacher at Proviso East English, told local media: “For me, class size is the biggest issue, along with the ability to attract and retain dedicated teachers. What happens here is that we have a lot of great teachers in the early years of their careers, but then they only stay for two years before moving to another district that pays better.

The PTU proposes a “cap” of 100 students for music lessons, 50 for gym and 25 for special education case management. The fact that these figures are considered a “ceiling” is indicative of the phenomenon of runaway children crammed into classrooms with no regard for learning. While oversized classrooms have been tolerated for years by unions and the Democratic Party, the widespread exodus of teachers from the classroom during the pandemic has dramatically worsened class sizes across the United States.

Students from all three high schools in District 209 walked out Feb. 16 in a massive protest in support of their teachers.

Meanwhile, just south of Maywood in Riverdale, 19 teachers also went on strike Tuesday at Patton Elementary School. Over the past nine months of negotiations, the district has insisted on a four-year deal with increases of about 4% per year, a significant pay cut given current inflation rates.

This union, also affiliated with the AFT, claims instead an insufficient rate of 6% per year over three years and the financing of art and technology programs. They pointed to the district’s apparent surplus due to one-time funding from CARES.

Parent Lashon Howard told Fox 32, “The teachers here are so wonderful, if they don’t get a fair contract, it affects us as well,” Howard said. “The school is understaffed. It’s not fair for them not to get a good contract. It’s not fair for us parents to have to watch this.

Get updates and information on the fight against the dangerous reopening of schools.