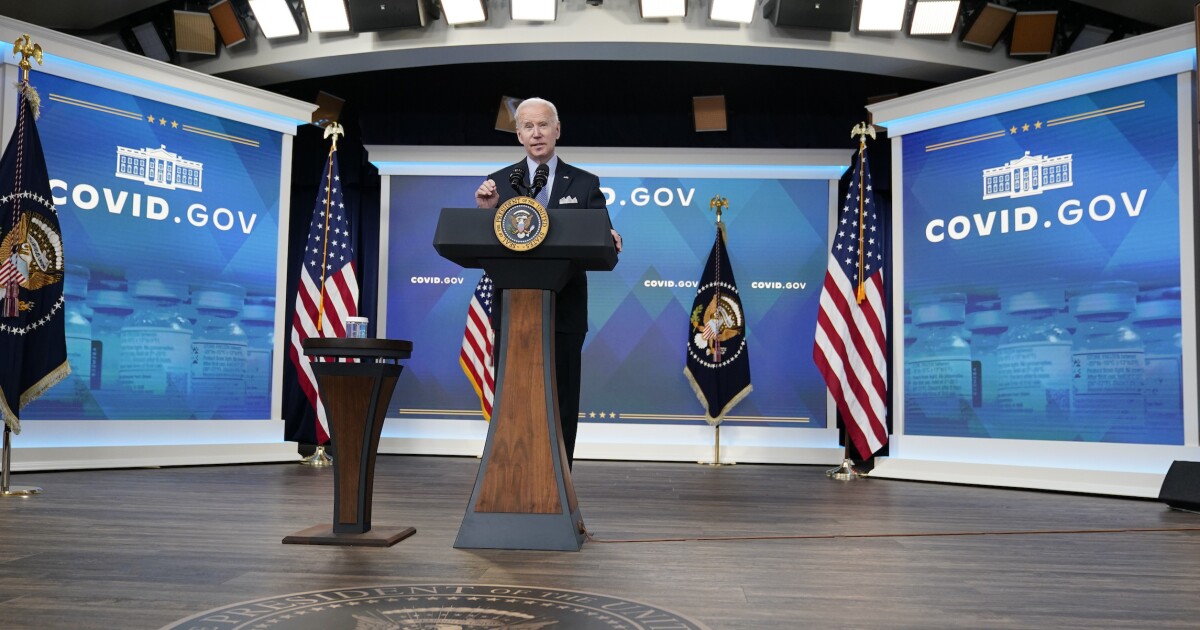 PResident Joe Biden heads into Thursday’s second COVID-19 World Summit in an awkward position: pushing for more funding to fight the virus globally while struggling to get the money home.

The preview of the event touts the need for new investments in order to provide tests, treatments and vaccines across the world and to prepare for the next pandemic. Yet Biden for weeks was unable to push a new round of domestic funding through Congress.

LEARNING LOSS IS REAL, AND TEACHERS UNIONS NEED AN EXPLANATION

“Without timely COVID funding, more Americans will die unnecessarily,” Biden said Monday. “We will lose our place in the queue for America to order new COVID treatments and vaccines in the fall, including next-generation vaccines in development.”

Biden asked Congress to authorize $22.5 billion for COVID-19 in March, a figure that was reduced to $10 billion in the Senate before being tabled.

Biden had previously attempted to tie COVID-19 funding to Ukraine aid, but resistance from both sides led to their decoupling. The Ukraine aid legislation passed the House and is now before the Senate.

“We’ve released a comprehensive pandemic playbook to help — a preparedness plan to ensure Americans are protected and that we stay ahead of the curve in our fight against COVID,” the agency told reporters. White House press secretary Jen Psaki earlier this week. “If we don’t act, we know the virus will continue to evolve. And without us remaining vigilant and prepared – like not having access to life-saving vaccines, tests, treatments – it has the capacity to disrupt our lives.”

The United States is co-hosting the summit with Belize, Germany, Indonesia and Senegal. Joining the virtual conference will be heavy hitters including Google, the Bill & Melinda Gates Foundation, the Clinton Health Access Initiative, the World Health Organization and the World Bank, as well as representatives from world governments.

The summit touts ambitious goals, such as preparing for the next pandemic, providing vaccines and treatment to high-risk populations and preventing a future health catastrophe. For all these points, the overview mentions the need for financing, investment and resources. The United States called on leaders from government, civil society, business and philanthropic organizations to “make significant new commitments.”

But at home, Republicans have been reluctant to fund the pandemic since Biden took office, unanimously opposing the $1.9 trillion U.S. bailout last March and continuing their resistance this year. Republicans’ objections include what they say is a lack of transparency regarding previously approved dollars, while some party members have tried to tie COVID-19 funding to southern border security.

Polls show that most people might be willing to take the Republican position. In a Axios– Ipsos survey from April, less than one in 10 people describe COVID-19 as a crisis. About 75% called it a manageable problem and 17% said it was not a problem at all.

Despite this, Senate Republicans are playing with fire, argues Democratic strategist Brad Bannon.

“If there’s another big resurgence of COVID in the fall, the president will be in a perfect position to say ‘I told you so’ right before the midterms,” ​​he said. But for now, Bannon concedes that Biden won’t be able to secure new funding in the face of united GOP opposition.

To date, the United States is a world leader in the fight against the disease and has committed to providing 1.2 billion doses of vaccines to 115 other countries, more than four times more than the next closest donor. .

“[The summit] reflects the work of the Biden-Harris administration to continue to advance the global response, including securing funding from Congress, as the virus does not wait for Congress to act,” reads the preview. event. “It is essential that Congress act with the urgency that a once-in-a-generation pandemic warrants. »

CLICK HERE TO LEARN MORE ABOUT THE WASHINGTON EXAMINER

Another point of contention is the still unresolved question of how the pandemic started. Biden has said he wants Chinese authorities to be more transparent in investigating the origins of the disease, but some have criticized his approach as being too soft.

“The Biden administration doesn’t even know how this pandemic started, and now President Biden wants to think about the next one, talking like it’s inevitable,” said Tea Party Patriots President Jenny Beth Martin. “Rather than grabbing another huge pile of cash, isn’t it time we gave the American taxpayer a break? We know that one of the causes of the worst inflation in 41 years is sky-high government spending. two years. If President Biden is serious about getting inflation under control and the economy back on track, he can start by curbing this wasteful government spending.”