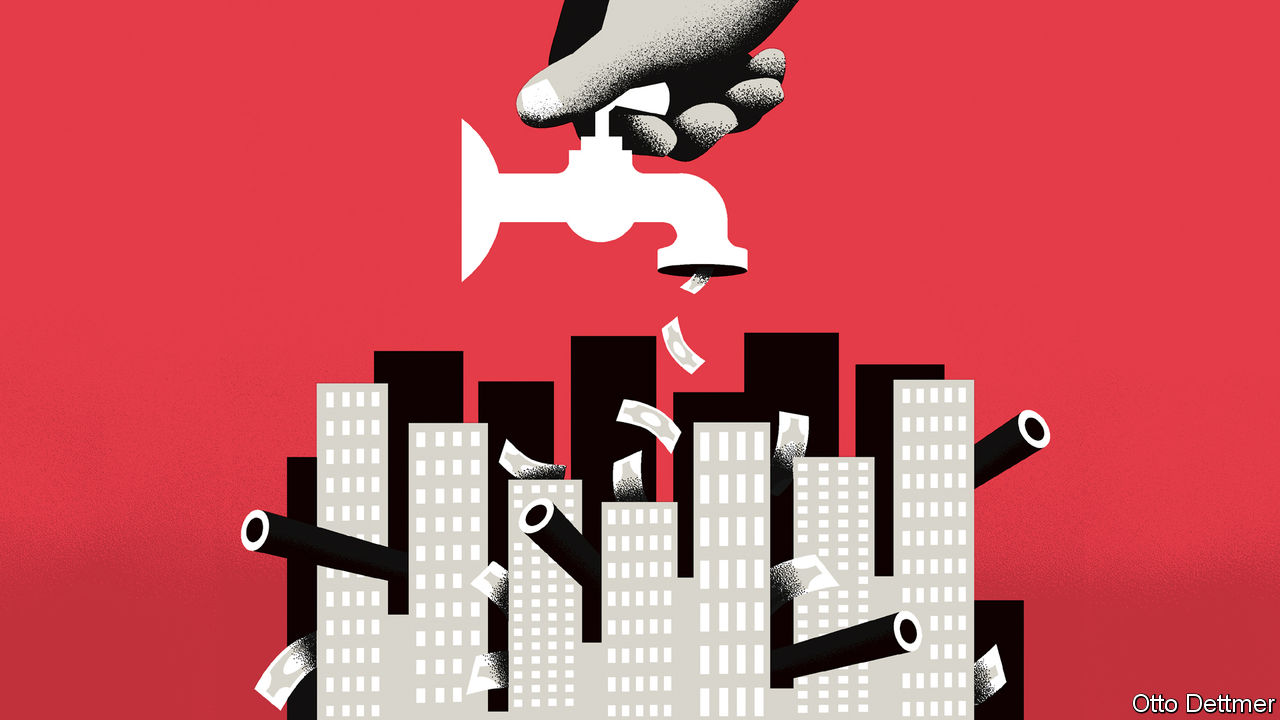 A new history of sanctions has troubling lessons for today

JUST AFTER the end of the First World War and the dissolution of Austria-Hungary, one observer noted that “all the clocks in Prague [was] disappeared, melted for metals. Another, in Vienna, saw children “wrapped in paper, for lack of sheets and blankets”. At the time, much of Europe was under tough economic sanctions, as Western powers tried to maintain post-war peace and curb communism. It was the first time that “the economic weapon”, the title of Nicholas Mulder’s new book, had been used, but it was not the last. In the 2010s, a third of the world’s population lived under sanctions. One of the current main targets is Russia, which will face new sanctions if it invades Ukraine. Mr Mulder of Cornell University examines sanctions in the three decades following World War I and comes to some disturbing conclusions.

Economic warfare against civilians is a centuries-old phenomenon. During the Hundred Years’ War, English troops launched countless brutal sieges against French garrisons, often starving them into submission. Blockades were an important part of the toolkit of 18th century naval warfare. The penalties were and are different. Rather than being imposed by one country on another, they often involved groups of countries coming together to punish rogue states. The formation of the League of Nations in 1919-20 facilitated coordinated action. And rather than being seen as an act of war, sanctions were often meant to prevent it.

Sanctions were also the product of the first great wave of globalization. In the 1970s until 1914, trade flows increased from 5% of GDP to 14%, then a historic record. With economies increasingly integrated, like-minded governments had many pressure points on renegades, whether denying them supplies of essential raw materials or refusing to buy their goods.

The role of finance truly distinguished the sanctions from the previous economic war. Between 1870 and 1914, annual capital flows averaged 4% of the GDP. The Allied Powers controlled the major financial centers of the world. Economists, as well as traditional military types, have thus helped to devise sanctions. They aimed to hit the aggressor states where they were weakest: in their funding needs.

Mr. Mulder’s book is full of anecdotes about how sanctions work in practice. As signs of impending war grew in 1935, Italian companies such as Pirelli (tires), Fiat (cars) and Montecatini (chemicals) were denied financing for their import needs by the Bank of Italy. England. By August 1941, expansionist Japan was cut off from the rest of the world economy, having lost 90% of its foreign oil supply and 70% of its trade revenue. Sanctions enforcement required a lot of effort in a world of increasing financial ingenuity. In the late 1910s, Banco Holandés de la América del Sud, a Buenos Aires branch of a Dutch bank, used five different names to transact for various Latin American branches of German banks.

William Arnold-Forster, a British administrator, argued that the sanctions could “make our enemies reluctant to have their children born”. Indeed, they could have horrible effects. Of the three main weapons targeting civilians during the period – air power, gas warfare and economic blockade – the blockade was by far the deadliest, Mulder says. “Pens seem so much cleaner instruments than bayonets,” Arnold-Forster noted wryly.

Whether the sanctions have achieved their objectives is another question. Small countries could be coerced into obedience, as twice in the 1920s, when the threat of sanctions prevented skirmishes in the Balkans from escalating into wider war. Greater powers were harder nuts to crack. Overall, “most economic sanctions haven’t worked” – the first lesson of Mr. Mulder’s book. More importantly, they did not prevent Germany from choosing war.

Sanctions have sometimes failed due to insufficient political will. For a long time, the American public considered that the sanctions were fundamentally anti-American, an anachronistic form of European imperialism. In other cases, financial globalization has narrowed, rather than widened, the room for maneuver of sanctioning authorities. Britain refrained from imposing a harsh financial blockade on Nazi Germany in the mid-1930s, in part because British banks held huge German debts. In the event of sanctions, the Reich would stop repaying this debt, and British financiers feared that the City would face a solvency crisis.

The second lesson of Mulder’s book is that sanctions can have unintended consequences. By the 1930s, world politics and economics had changed dramatically from the 1920s. The Great Depression had sent many governments down a protectionist path. World trade was in a long slump. Fascism was on the march.

Sanctions, Mr. Mulder shows, have added fuel to the fire. Governments that believed themselves vulnerable to sanctions have withdrawn further from the global economy, in order to ensure their strategic independence. In the 1930s, Japan sought to develop a “yen bloc”, an economic zone including Korea and Taiwan, to reduce dependence on Allied powers. In the mid-1930s, Germany fought for “freedom of raw materials”, in part through the construction of massive synthetic oil production capacity. (Anyone who witnesses Russia’s efforts in recent years to wean itself off Western finance can conclude that not much has changed.) It also required conquest. “I need Ukraine”, said Adolf Hitler in 1939, “so that they can no longer starve us like in the last war”.

In this sense, the international search for effective sanctions and the ultra-nationalist search for autarky “have become locked in a spiral of escalation”. Sanctions did not work in a deglobalized world and contributed to its continued fracture, in turn setting the stage for World War II. Mr. Mulder is too cautious a historian to draw parallels between what happened in the interwar period and today, when geopolitics is once again turbulent and globalization is receding. But the lessons are sobering. ■

For more expert analysis of the biggest stories in economics, business and markets, sign up for Money Talks, our weekly newsletter.

Get ready to pay your student loans